The NHS compensation system — which costs the taxpayer around £2billion each year — is ‘not fit for purpose’, MPs have warned.

A drastic overhaul is urgently needed of the current scheme, which reimburses patients who suffer harm in the health service.

That is the view of the Health and Social Care Committee, led by former Health Secretary Jeremy Hunt.

Payments need to be given out faster and less should be spent on legal fees, they said.

The current system for families is often ‘slow, adversarial, stressful, and often bitter’, the committee added.

Its focus needs to shift from a blame culture of individual medics to one where system-wide failures are recognised and lessons are learned, according to the MPs’ report.

Last year, the negligence bill surged to £2.17billion in compensation and legal fees, up from around £900million seen in 2011.

That is the equivalent to the annual running costs of the biggest hospital trust in England or four average-sized hospitals.

This cost is predicted to double over the next decade to £4.6billion, with a quarter of this money going to lawyers, the committee said. 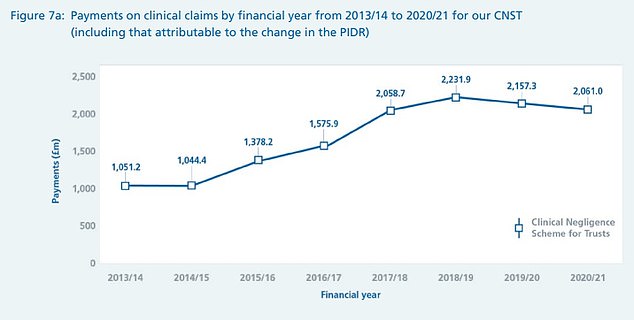 NHS negligence payments in England have increased from £900million to more than £2billion in a decade. Graph shows: The amount paid out on the clinical negligence scheme from 2013 to 2021

GPs told not to use language that could belittle patients

Woke doctors are calling for a revamp of the language used by medics at appointments so it does not belittle patients.

Phrases like ‘take’ a test or ‘send’ someone home makes patients feel ‘childlike’, they said.

‘Denies chest pain’ should be described as ‘reports no chest pain’, while ‘patients failed on medication’ should be swapped out for ‘medication was not effective for the patient’, they claimed.

The phrase ‘poorly controlled diabetic’ can also be stigmatising and make the patient feel judged, the doctors said.

The comments were made by Dr Catriona Cox and Dr Zoe Fritz, from the University of Cambridge.

They laid out an argument for more empowering language in the British Medical Journal (BMJ).

They argued the change ‘is not a matter of political correctness’.

Instead, they say simple words can ‘insidiously’ affect the relationship between doctors and their patients.

Mr Hunt said: ‘The system of compensating patients for negligence in the NHS is long overdue for reform.

‘We’re urging the Government to adopt our recommendations to reduce both the number of tragedies and the soaring costs to the NHS.

‘Under the current system, patients have to fight for compensation, often a bitter, slow and stressful experience.

‘We need a better system that learns from mistakes, following the lead of countries like New Zealand and Sweden.

‘We must move away from a culture of blame to one that puts the prevention of future harms at its core.’

The committee said the current system is focused on clinical negligence which, by definition, seeks out individual failings and is adversarial.

‘In other countries, gains are made by careful system-wide analysis rather than an insistent search for individual error,’ the report said.

‘We urgently need a system where the biggest priority is the prevention of future harm.

‘This system should review the facts and circumstances of a case and compensate patients not on the basis of whether there was clinical negligence, but when there has been medical error or best practice was not followed.

‘Any investigation should prioritise the identification of system changes that can be disseminated across the NHS to prevent mistakes from being repeated.’

Scrapping the need to prove clinical negligence will increase the number of people entitled to compensation, the MPs said.

But they added ‘the evidence from countries that have adopted such an approach is that overall costs will be lower not higher’.

They also called for an independent administrative body to be made responsible for investigating cases and determining eligibility for compensation in the most serious cases.

The current system also pays out more to richer children, MPs claimed. They said: ‘The child of a cleaner receives less compensation than the child of a banker.

‘This contradicts the basic principle of equality that sits at the heart of our health system.’

Before any court case, all cases should go through non-legal mediation and other methods to avoid legal routes first.

Furthermore, lifetime payouts — which are set at one point in time rather than reviewed over the course of a claimants life — should be axed and replaced with initial compensation ‘within weeks of a claim’.

He said: ‘We need reforms to make legal costs more proportionate, and make things more fair and transparent which will in turn reduce soaring costs.

‘In our evidence to this inquiry, we raised concern that the system is also neither equitable nor appropriate for families and children who suffer child-birth injuries.

‘The process of proving fault is highly stressful and lengthy for all involved, and reinforces a blame culture which acts as a barrier to learning.’

He added: ‘The Government committed to publishing a proper strategy on clinical negligence in 2018 and while there have been more pressing priorities, we cannot not lose sight of this.

‘We need commitment to some bold and swift steps if we are going to get close to addressing this issue.’

We use cookies to ensure that we give you the best experience on our website. If you continue without changing your browser settings, we'll assume that you are happy to receive all cookies on our website.OkCookie Notice